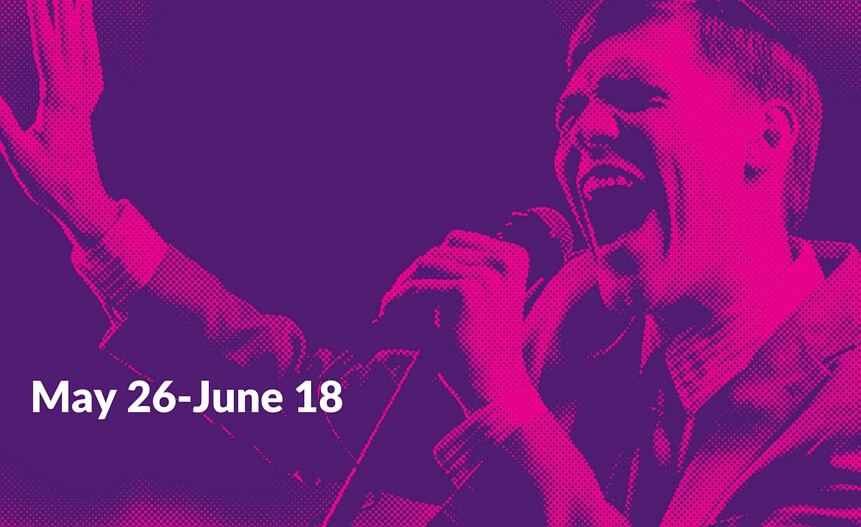 The year is 1985. The hair is big, collars are up, and greed is good. Rock-star wannabe Robbie Hart is New Jersey’s favorite wedding singer and the life of the party—until his own fiancée leaves him at the altar. Shot through the heart, Robbie makes every wedding as disastrous as his own. Things look up when he meets Julia, a winsome waitress, but she’s about to marry a Wall Street shark. Unless Robbie can change his tune and pull off the performance of the decade, the girl of his dreams will be gone forever.

Based on the hit New Line Cinema film starring Adam Sandler and Drew Barrymore, The Wedding Singer‘s 1980s vibe, hilarious book, and sparkling new score will leave you cheering. Plus, 2016 marks the 10th anniversary of the show’s 2006 Broadway premiere. “Just say yes!” and join us for this romantic, rocking musical comedy.

Rated PG-13. Some material may not be suitable for children. Parental discretion is advised.

“Between the amazing musical score, the awesome 80s costumes, and the high-energy dances, you’re guaranteed a truly bodacious time…I can’t even decide on the best part of the musical…The Wedding Singer was totally awesome.”
Read the full review from MD Theatre Guide.

“Upbeat and entertaining, with lots of energy and laughs, Annapolis Summer Garden Theatre’s The Wedding Singer is a splendid way to spend an evening, especially in the open air in downtown Annapolis.”
Read the full 5-star review from DCMetro Theater Arts.

“…an invested and energetic cast and crew bring you a slick and rollicking evening.”
Read the full review from Bay Weekly. Mark Briner is ecstatic to return to ASGT after the opportunity of a lifetime directing last season’s smash hit Catch Me If You Can. Mark is a graduate of The Johns Hopkins University, where he helped establish the student performing group the JHU Barnstormers. Mark has been active in community, regional, and dinner theatre as a performer, director, costume designer, set designer, and producer with numerous awards to his name. His directorial credits include such varied pieces as Chess, Altar Boyz, Evita, Once on This Island, She Loves Me, Fool for Love, Vanities, The Wizard of Oz, and Dreamgirls, which was produced with a grant from Dreamworks Studios and named Best Musical of 2006 in numerous awards throughout the Baltimore/Washington area. An active proponent of the arts, Mark serves as a member of the Board of Directors for Tidewater Players, the Children’s Playhouse of Maryland, and is a founding board member of Winters Lane Productions.

“After recreating the magic of the 1960s last season directing ASGT’s amazing production of Catch Me If You Can, I relish the opportunity to pay homage to the fun, over-the-top silliness of the 1980s in The Wedding Singer. The music is a valentine to the last great decade of pop music. The dances salute the visuals of the budding era of MTV. And the costumes have infinite potential to dazzle recreating the distinctive looks of the day. I look forward to combining all this with the wonderful talent at ASGT and an amazing production team to create an experience that will pay loving due to the last best decade in history.” – Mark Briner