A Refreshed Logo For Our 50th

Have you noticed our refreshed logo? We’re excited about it!

Here’s the story of the original logo, designed by Martha Wright and Roland Chambers:

Seven stars are used at the top of the seal to signify that Maryland is the seventh of the original thirteen colonies, and because ASGT presents outdoor “theatre under the stars”. The Tudor rose, Annapolis’ city flower, was Queen Anne’s personal symbol and is used to symbolize the garden. The two rampant lions which support the seal stand for uprightness and are symbolic of the Mother Country. The masks are used traditionally in the theatre to denote comedy and tragedy, and the ribbons form the treble clef as ASGT presents musical theatre. The theme is carried out in black and white, the colors of the piano keyboard.

And here is the story of the 50th anniversary logo, refreshed for ASGT by Drama Queen Graphics:

Our black-and-white color scheme has given way to bold colors that reflect our personality: twilight blue, colorful splashes of confetti, and gold for our 50th anniversary. The seven stars remain at the top of the shield to represent our outdoor “theatre under the stars”. Two lions continue to support our seal and symbolize passion and integrity. Finally, our organization name was removed from the shield to make room for “1966-2016” and “50 years”, which replace the other symbols (drama masks, treble clef, Tudor rose). Our name now appears below the seal, anchoring the image. 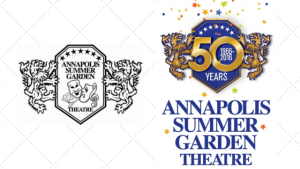